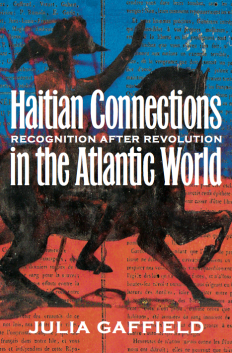 “Julia Gaffield has undertaken a significant research project. . . . Based on this impressive research, she makes considerable headway in unraveling the complex story about the international relations of Haiti after its revolution.”–Hispanic American Historical Review

“Show[s] vividly how Haitian sovereignty was negotiated and contested on the international stage. . . . Provide[s] a model for the growing number of scholars engaged in writing the history of sovereignty in the revolutionary era.”-William and Mary Quarterly

“A pioneering work in the new scholarship on Haitian revolutionary studies.”–American Historical Review

“Opens up exciting avenues for rethinking the interconnections between maritime circulation, state formation and diplomacy.”–The International Journal of Maritime History

“A terrific book—timely and original. The boom in Haitian revolutionary studies (which has been shaped in critical ways by many of the authors in this collection) is producing a new wave of English-language work on post-independence Haiti. This book addresses this growing interest in the early Haitian state and the legacies of the Haitian Revolution not just in the Atlantic World but in Haiti itself. A very strong, interesting collection with broad appeal.”—Ada Ferrer, New York University

“This landmark collection offers the first detailed examination of one of the most neglected documents in modern world history. Julia Gaffield and the other contributors offer a comprehensive account of the creation, meaning, and legacy of the Haitian Declaration of Independence. The essays demonstrate both Haiti’s deep links with the Atlantic World and the distinctiveness of the Haitian case.”–Alyssa Goldstein Sepinwall, California State University San Marcos

“The contributions to this wonderful collection confirm the Revolution’s significance on a global stage and also reckon with Haiti on its own terms. Put another way, [this volume] compellingly testifies to the vast amount of material work still to be done on Haiti’s early years. The essays in this volume not only make significant inroads into this work but also indicate useful directions and methods for further scholarly inquiry. As such, Gaffield’s collection both offers a fascinating aperture into reconfigurations of comparative studies and serves as an extremely helpful guidebook for scholars interested in the Haitian Revolution.”–Small Axe

“This collection of essays showcases some of the most recent conceptual innovations in Haitian Revolution scholarship, as well as some of the more prominent ongoing debates among scholars of this era…. [T]his volume represents many of the best trends in the growing field of Haitian history. It is broad, engaging, and innovative enough to belong on the shelf alongside comparable collections.”–Journal of Social History